When you get your stuff organized for any outdoors trip, are you the boss? I mean, are you the one in charge of planning and organizing and even packing the car? One way to make this trip more engaging for your kids is to get them in on it. Have a sit down strategy meeting at the kitchen table where you plan out what you’ll need to bring, what to eat on the trip, and more. One of the best ways to get the kids excited about an adventure of any kind is to make them know that they’re a part of the decision making process, even if it’s a small part.

What does any kid going on his first outdoors adventure want? His own gear! Why does Mom get to use the hatchet, and not him?! Unfortunately, so much of the gear aimed at younger adventurers is pre-printed with licensed cartoon characters or teddy bears, even the higher end stuff made by the top-notch gear companies. What’s a normal eight-year-old kid supposed to do with a Barbie or Spiderman sleeping bag and a mess kit with penguins on it? (I’m picking on Barbie and Spiderman because I went to a big box store yesterday to get a cheap, cheap fishing rod for my twelve-year-old since she’s never been fishing and we have a trip coming up…literally our only two choices for all-in-one kits were Barbie or Spiderman, and not only is that dumb, it was more expensive than some of the regular gear because it’s licensed!)

Instead, the folks at Leatherman (the really great multi-tool manufacturers) have created a line of tools called the Leap, and just as the name implies, it’s a great jumping off point for having a tool of your own, even if you’re not ready to lead the expedition (and you’re not even close to driving the vehicle). 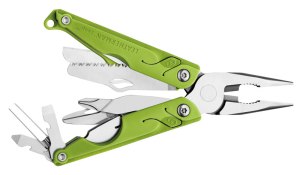 This thing has tons of great tools, including a blade that YOU get to decide is onboard or off!

The Leap is simply an awesome tool for kids. This is just the right tool to give to your kids before you take them on any adventure for the first time. I LOVED the fact that it comes with an actual blade, but that parents can decide when their kids are ready for the blade to be added to the tool. Otherwise, the same sturdy quality of other models of Leatherman tools shines through in this one.

I was really pleased with the fact that the tools weren’t annoying to deploy. I’ve used other models of competing products and opening up a tool can be so difficult that you either a) lose a thumbnail or b) need a tool to do it! These move quite easily without being so loose that they fly open when you don’t want them to.

If I had to find something to complain about, I’d venture this guess. The two sides of this tool are covered in plastic (you can select your color from their list) and it’s conceivable that the plastic could break if this tool is dropped, thrown, or otherwise used or abused. I have absolutely no proof of that possibility other than–like I said–having to find something to complain about.

Now, if you’ve never used a Leatherman tool yourself (or any other multi-tool), this might very well be the one you want to get for your gear, too. It’s easy to operate and comes with a ton of tools that could be helpful in any situation. It’s not so hefty or Special Ops-looking that you’re going to feel ridiculous carrying it around, and no, you don’t have to wear it on your belt like some of the die-hard multi-tool fans. It’s small enough to fit in the palm of your hand when closed, and is actually a great thing to have in the dash of your car or in your purse when you’re not outdoors. Check it out at this link HERE to see what it can do!