I’m a complete and total sucker for cool gadgets that make the outdoors even better, and this handy device is a set it and forget it solution to keeping you powered up and connected while you’re out riding your bike. This one is borderline “must have,” as you’ll quickly see.

Back in 2005, I was out for a training ride for my first triathlon. This was actually supposed to be my last serious, all-out effort before the event, which was two weeks away. We’d covered more than sixty miles at a grueling pace and were headed back. Without about ten miles left until we reached the car, the bike in front of me stopped for a split second to let a snake cross the road in front of him, but that was all it took. My front wheel barely brushed that cyclist’s back wheel, but it was enough to flip me to the ground. I broken my collarbone and hit my head (thank god for helmets!) hard enough to have a concussion. I very clearly remember thinking, “Wow, you really do hear a ringing in your ears!” before everything went black.

I was in and out of consciousness for the next hour or two. I came to fully in the hospital, after I’d been transported, had a CT scan, and had already had the collarbone set. I remember brief snippets of all of it, but not the whole thing. I do have one very vivid memory, though, and that’s being in someone’s car as they drove me to the hospital. For a few seconds, I had a panicked “over”-reaction because my husband inadvertently said, “Some guy drove you to the hospital.” I began to yell, “No! It wasn’t a stranger! I knew who it was the whole time!” My husband saw the vehicle and knew it wasn’t ours, but what he didn’t know was a stranger had given my cycling friend his keys to get me to the hospital. He then took my friend’s keys and rode his own bicycle to where we’d parked, took my friend’s car, and swapped out at the hospital.

Why did my friend take a stranger’s new car? Because our phones were dead, and we couldn’t call for help. The kindly old man–saint on earth that he is–who gave us the keys didn’t own a cell phone.

This scenario could have been very different. I could have hit the snake myself, flipped, landed, and had a stranger take me in his car. I would hope that no one would take an unconscious, injured person somewhere and hurt her even worse, but the world is a strange place.

After I recovered somewhat, all I could feel was gratitude that I’d been out that day with another racer, and not out with my two kids. What would they have done if I was unconscious on the ground and my phone wouldn’t even let them call their dad? They would have sat beside my body and waited, probably crying, for someone to come along. Then instead of someone hurting an unconscious adult, the stranger can make the choice between helping us or taking two little girls to his car instead.

Here’s the thing: there are a million reasons why having a fully-charged phone is important for this kind of activity, and the BikeCharge Dynamo is an excellent way to make sure you never have a dead smartphone battery while you’re out riding. It attaches with easy to follow instructions for DIY installation, and it charges an external battery while you pedal. It even has lights on it as an added safety feature, lights that are powered when you ride. Your phone connects to the battery and charges off your own green energy, but even better, any USB-powered rechargeable device can get a boost while you ride.

Now the downside… this Dynamo is charging that battery based off of a current you’re generating as your wheel goes around, so yes, it’s going to create a little drag. It’ll be fine on downhills (in fact, it has a “power stopper” to keep it from overcharging on the downhills!) and level ground, but if you’re going to climb any serious hills for long periods of time, you’re going to notice. It won’t be impossible, but it will be noticeable that there’s a little bit of drag on your wheel. Chalk it up to extra calorie burn, and pedal through it!

The great people at Bike2Power are offering a discount on this device with the coupon code GET10NOW, so there’s no excuse! Get your own Dynamo (make sure it’s the BikeCharge Dynamo and not a hub dynamo, which they also sell and which requires professional installation) and generate your own electricity. Even better, install it on the back wheel and put the bike up on the trainer so your kids have to pedal to charge their devices! 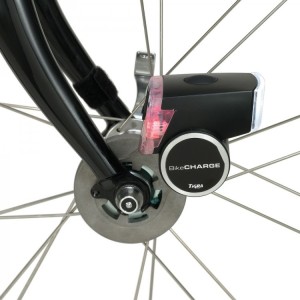