Don’t Be Afraid of Outside

There’s no shortage of outdoorsy blogs on the internet, and they’re probably much more exciting than this one. I’ve never climbed Mount Everest, I’ve never gone scuba diving in the big blue hole off Belize. There are a lot of really great adventure blogs and online magazines that can give you all the details of those places. That’s not what this one is about.

The whole idea for this blog happened because every single time I mention a camping trip or a day of kayaking or going snorkeling off the coast, the reaction is the same: “Aren’t you afraid to take those little girls camping/kayaking/hiking/cycling/snorkeling/rock climbing/etc.?”

Now, first of all, those “little girls” are now fifteen and twelve years old. True, they’ve been doing these things since before they could walk–my oldest used to stand on my water skis in front of me and ride up and down the river before she was big enough to get up on her own–but to somehow imply that I or them or both shouldn’t be doing these outdoorsy things because of fear is ridiculous.

The very thought of not taking kids on neutral-level adventures–camping in a state park, hiking on a well-groomed and maintained hiking trail, snorkeling in a part of the ocean with hundreds of other tourists within earshot–all because there is some flawed perception of danger was unacceptable.

What happened to all those people posting things on Facebook about how there were no video games or 500-channels on television when they were kids, posting about how they would leave the house after breakfast and they wouldn’t come back home until they were called for dinner? If that was such a great time in our history, what happened? Those people should be parents and grandparents right now, but they’re the very same people who can’t believe my girls and I take off on our very safe adventures. 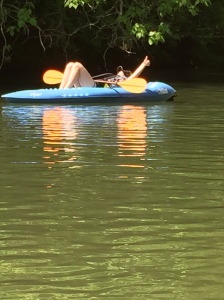 The sad truth is, all those people who ask me that same question aren’t actually afraid of the outdoors. They’re afraid of embarking on a trip and not having it be the most magical vacation ever. What’s really happened is we’re losing our ability to see how we can make these experiences feasible when we live in a world with jacuzzi tubs and microwave popcorn and Netflix streaming. We’re not truly afraid of bears or sharks or serial killers in the woods, we’re afraid that we don’t know how to get there, have a good time, and get back, all in one piece. And I’m here to remind you that it doesn’t have to be perfect and it doesn’t have to be the best vacation ever. In fact, it doesn’t even have to be tons of “fun”… for now. Because I can promise you this: when your kids are grown and they’ve finished school and they’re working and starting families of their own, they’re going to remember with new eyes how much fun it was, and they’re going to be grateful for every minute you spent with them outside. 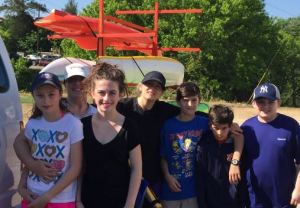 There’s always at least one frown in any given outdoors pic, but it’s never the same person!

2 thoughts on “Don’t Be Afraid of Outside”