Anyone Can Do This!

We’ve been gone from the blog for a little while because we had some back-to-back traveling to do, most recently to a state park in the southern part of our state. The camping-kayaking trip served a specific personal purpose.

My mother was once wheelchair bound and eventually with enough physical therapy has gotten to the point that she can walk with a walker. She decided over the summer that she wanted to try kayaking, and even wanted to drive five hours to my house so I could take her on the local river run. With her bad hips, I worried that sitting in a kayak with her legs in front of her could eventually start to hurt; after all, when you put in at one location and then have to take out at a farther point along the river or creek, you can’t just stop and say, “I’m done. This hurts!” You HAVE to finish it.

I suggested we camp at very large lake in her part of the state, and then we could paddle as much or as little as she wanted to. I’d stay out there all day if she liked, but if her hips couldn’t take it, then she would know that a river trip wasn’t feasible.

It took some effort, but after only a few minutes (and several fishermen offering to help, for which I thanked them profusely and replied, “If she’s gonna do this, she has to learn how to get in and out of the kayak!”) we were paddling! We’d used the state park’s concrete boat ramp, and that worked for her really well. I got my two-man kayak situated in the water and then helped her walk down the ramp. Basically, she just had to sit down and then put her legs in. The real trick was finding a sitting position that accommodated her hips since they no longer bend at the waist at a typical angle. The adjustable back rest helped, and she felt great.

We paddled close to the boat ramp until she got the hang of her paddle. Just to make things even more interesting, she’s had shoulder replacement surgery in the past couple of years, so I wanted to make sure her shoulder didn’t hurt from the repetitive motion involved in paddling. When she felt confident that she could do it pain-free, we left the little slough near the boat ramp and ventured out further.

“What’s that up ahead?” she asked when we’d made it a good distance away. I squinted, and said I thought it was a stick. She said, “Oh, it looks like a bird!”

We went to check it out, just to get close enough for her to see the aquatic bird take flight when we came too close for comfort. Oddly, the bird in question didn’t seem to feel threatened by our presence.

That’s because it wasn’t a bird. It was a twelve-foot alligator. He was just lying in the middle of the lake, getting some sun. The stick/bird was actually his head, and when we got too close the rest of his body floated to the surface.

You know how in cartoons when someone’s trying to run away the little character’s legs will spin in a circle while he goes nowhere? That was our paddling effort for a couple of seconds. I quickly got us turned around but finally told my mom, “Let me handle this! You’re making us go backwards, TOWARDS the alligator! I’ll paddle, you watch the alligator and tell me if he comes towards us!”

And he never budged. Once we turned around and started paddling away we were no longer a threat, so he eventually lowered his body back into the water and left his head sticking up, just like before. Even if we’d been stupid enough to try to get closer to him instead of leaving slowly, he probably would have just swam away. He most likely lifted his body in order to make his getaway, NOT to come eat us. It was actually over an hour later that I walked back around and took this from the opposite bank with my zoom lens.

I’m glad to say that after our “brush with toothy death” my mom and I paddled for another forty minutes or so. We took some kayak selfies to show my dad and her friends from church, we talked about good places to paddle and proper technique, and she was able to get herself back out of the kayak with a little help. We talked about a contingency plan if she couldn’t get herself out of it, which would be to paddle a little way out from the ramp, fall overboard, and swim to the ramp where she could stand up (she didn’t love that thought…after all, there was a gator out there somewhere and lake water isn’t exactly see-through). The only reason we cut our kayak trip short was some thunder clouds rolled in and we didn’t want to be caught in the rain.

Basically, the purpose of this entire blog is to help people who otherwise don’t have any experience with the outdoors–and therefore don’t have confidence in what to do in an unexpected situation–realize that they can do it, they can be self-sufficient, and they can have fun. They can do it… you can do it. Your kids can do it. Just don’t pet the gators.

We did finally see a bird. (Where were you earlier, dummy?) 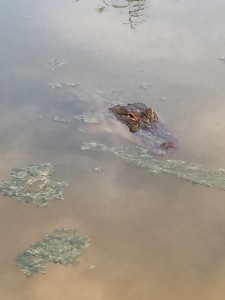 I get the concept of camouflage, but he shouldn’t match the lake water this closely! 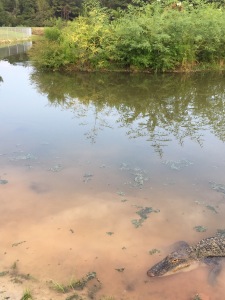 See? He’s under there somewhere!

Don’t Be Afraid of Outside

There’s no shortage of outdoorsy blogs on the internet, and they’re probably much more exciting than this one. I’ve never climbed Mount Everest, I’ve never gone scuba diving in the big blue hole off Belize. There are a lot of really great adventure blogs and online magazines that can give you all the details of those places. That’s not what this one is about.

The whole idea for this blog happened because every single time I mention a camping trip or a day of kayaking or going snorkeling off the coast, the reaction is the same: “Aren’t you afraid to take those little girls camping/kayaking/hiking/cycling/snorkeling/rock climbing/etc.?”

Now, first of all, those “little girls” are now fifteen and twelve years old. True, they’ve been doing these things since before they could walk–my oldest used to stand on my water skis in front of me and ride up and down the river before she was big enough to get up on her own–but to somehow imply that I or them or both shouldn’t be doing these outdoorsy things because of fear is ridiculous.

The very thought of not taking kids on neutral-level adventures–camping in a state park, hiking on a well-groomed and maintained hiking trail, snorkeling in a part of the ocean with hundreds of other tourists within earshot–all because there is some flawed perception of danger was unacceptable.

What happened to all those people posting things on Facebook about how there were no video games or 500-channels on television when they were kids, posting about how they would leave the house after breakfast and they wouldn’t come back home until they were called for dinner? If that was such a great time in our history, what happened? Those people should be parents and grandparents right now, but they’re the very same people who can’t believe my girls and I take off on our very safe adventures.

The sad truth is, all those people who ask me that same question aren’t actually afraid of the outdoors. They’re afraid of embarking on a trip and not having it be the most magical vacation ever. What’s really happened is we’re losing our ability to see how we can make these experiences feasible when we live in a world with jacuzzi tubs and microwave popcorn and Netflix streaming. We’re not truly afraid of bears or sharks or serial killers in the woods, we’re afraid that we don’t know how to get there, have a good time, and get back, all in one piece. And I’m here to remind you that it doesn’t have to be perfect and it doesn’t have to be the best vacation ever. In fact, it doesn’t even have to be tons of “fun”… for now. Because I can promise you this: when your kids are grown and they’ve finished school and they’re working and starting families of their own, they’re going to remember with new eyes how much fun it was, and they’re going to be grateful for every minute you spent with them outside.

There’s always at least one frown in any given outdoors pic, but it’s never the same person!

Today was an incredible day for paddling, and the funny thing is, we almost didn’t go. I’m a morning person (and by morning person, I’m talking 4am) but I slept in until almost six. I pretty much cancelled our trip, but I hated to do that to the kids. All told (and thanks to the fact that the kayaks stay on their trailer at all times), we were out the door by eight!

There’s a great creek near us that offers paddlers of every ability level something to do. You can race down it, you can take the more rapid-moving paths, or you can just mosey like you were in an innertube. You’d think it would get boring paddling the same stretch of the same river over and over, but there’s something different every single time we go.

For example, this guy…

He’s from a trip a couple of weeks ago with my good friend Wendy, but we sat not five feet from him while this rather chubby beaver lazily munched some leaves, ignoring us completely while we were in awe of the local wildlife.

Today, it was swallows’ nests. I can’t believe I’ve never looked up (as many times as I’ve passed under that bridge), but here’s just one section of the bridge and all the swallows’ nests tucked up inside it.

It’s a real joy to live so close to this kind of outdoors opportunity, but we’re also just as likely to haul the kayaks to farther places, just to try some place new. Of course, the way water levels change, your closest creek might be new each time, too. This tree, for example, was practically underwater the last time I paddled here, but now we can see the really cool root system.

The last time I passed it, there was an alligator hovering nearby, but he wasn’t there today. Of course, at least one paddler in our group was quite pleased to NOT see him today. 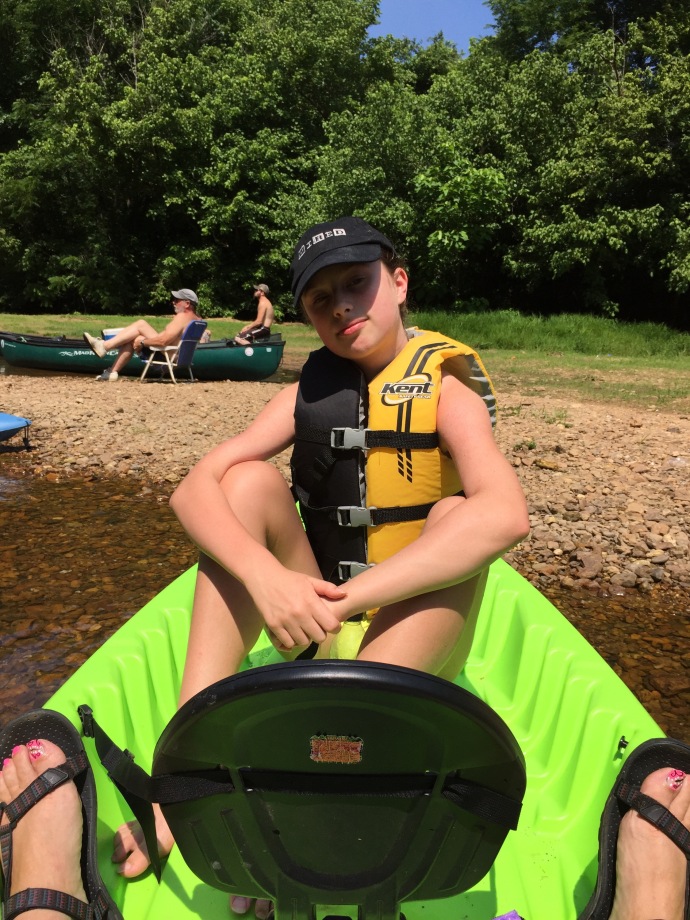 Out on the Water

It doesn’t matter where we go, if there’s water involved then I’m happier than a pig in mud. Or a hippo in…water.

Whether it’s a camping trip to the beach or a kayak day trip, if there’s water involved, it’s heavenly. Ideally, the water involved won’t be rain, but then again, it happens. You can let it ruin your trip or you can go with it.

Locally, I live for going kayaking. This actually happened one recent Sunday. Yes, I texted my friend and suggested we play hookie from life and go paddling. She was totally game, and we ended up seeing a beaver.

And that’s how awesome the water is. You never know what you’ll see or what the experience will be like. But it’s practically guaranteed to be amazing. 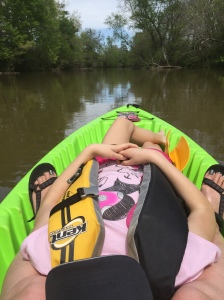 My daughter has learned how to truly get the most out of kayaking, and that’s basically to let someone else do all the work.