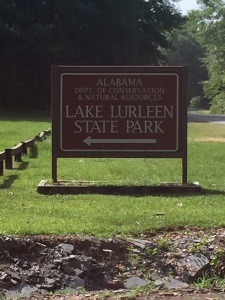 So when we had the chance to visit Lake Lurleen State Park in Coker, Alabama, it was a toss up as to what would be waiting for us. Named after Lurleen Wallace, the state’s first and only female governor–who by all accounts has done more for conservation in the state than any other governor before or since–it is a real treasure of picturesque and scenic beauty.

The amenities are pretty standard for a state-funded park. The campsites are tucked away among the trees and are very private, meaning your fellow campers would have to be real jerks to interfere with your fun. The bathhouses are (again) what you might expect from a state budget. They’re nice enough and kept clean, but they’re no Hilton. Be aware that actual shower houses are scattered around the park and you might need to drive to one, depending on where your camp site is located. Bathroom buildings, though, are far more common so you won’t be too far from one no matter where you stay.

About as common as the bathroom buildings are the playgrounds. They’re old-fashioned but sturdy and plentiful. Of course, the swimming beach with its roped off water access will be far more fun to most kids. The park rents pedal boats and john boats (aluminum fishing boats), as well as floats for enjoying the lake.

There’s a camp store at check in, but it’s tiny so don’t expect to browse the aisles looking for something for dinner.

But the real problem (or the real bonus, depending on why you’re getting away from it all!) is that there is no cell phone service.

I don’t mean spotty or unreliable, I mean your phone screen will say No Service. We tried it on two different phone carriers and had nothing. The trick is to make sure you inform someone of where you’ll be staying and how to reach the park office in an emergency, but remember that the rangers are not personal assistants. Luckily I had no reason to test out my theory that they’d come inform me if there was an emergency, but I’m sure they’d oblige.

That brings me to one of the best parts about this park, at least as far as a mom camping in the woods with her two daughters is concerned: I can’t remember ever staying at a park where the rangers patrolled as much as they do. The truck makes the rounds throughout the day and evening, whether it’s a garbage run or just to check up on things. After seeing the truck go by for the third time on our first day there, it was nice to know someone was watching out for the guests.

This is going to sound a little weird, but there was one feature about this park that made it stand out: the darkness. I can’t recall ever having stayed at a park with so much black sky, which would be awesome for watching meteors! I’m already planning a return trip in August for the Perseid meteor shower since there’s very little threat of light pollution washing out the show.

Check out the park for yourself by visiting the AlaPark website at alapark.gov, and plan a meteor campout of your own!